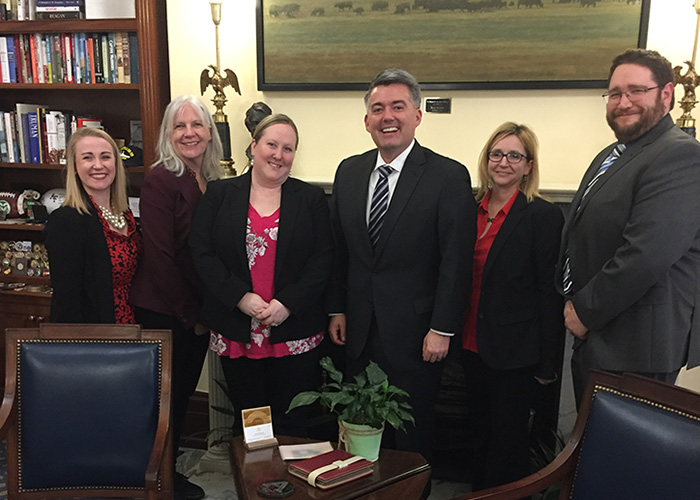 David Lucci and I had the honor of representing CAFAA at the NASFAA Legislative Conference in Washington D.C. We were joined by our esteemed Colorado colleagues, Barbara Marshall (CU Boulder) and Theresa Lavin (CCD). During this conference we were able to meet with the Legislative Aides to Senator Michael Bennet and Congressman Jared Polis. As you see from the picture, we got to meet Senator Cory Gardner in person to voice our concerns regarding the Reauthorization of the Higher Education Act. The issues that we hit upon were:

We received very positive responses from everyone that we met with. Saving financial aid programs is high priority for each congressman but, each has a different spin on how to tackle specific issues.

There are many conversations happening at the federal level about the future of financial aid. I encourage all members to visit the website of our Senators, Bennet and Gardner, as well as the Representative for your district. CAFAA will continue these conversations and keep everyone informed of changes.

Now is the time to get involved! If you would like to be a part of the conversation, please consider volunteering for CAFAA in any way that you can. We have varying levels of commitment that can fit your schedule. The volunteer form can be found at cafaa.org/volunteer/.