How to 1up Your Processing Game

04 Oct How to 1up Your Processing Game 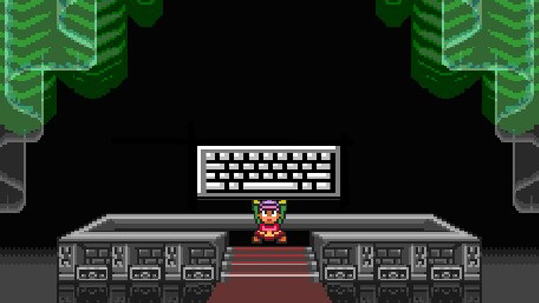 Video gaming has become the highest grossing sector of the entertainment industry in the United States. According to an article published by Forbes, Grand Theft Auto V took in over $1B in the first 24 hours after launch. This secured the game’s position as the highest grossing launch in entertainment history, beating the three top films of all time by 16 days. As video gaming has become increasingly prolific, so has the rise of players to pseudo-stardom. What tools help a gamer fend off the impending horde of baddies? Better yet, how can we harness that power, as financial aid professionals, to step up our processing game?

Perhaps we should journey toward that mist shrouded castle in the distance. Wait. See how the office supply catalog is glowing in the corner? Let’s pick up that item first. It contains a message: “Behold! You have gained access to the elusive ‘Gamer’s Keyboard’.”

Alas, our character does not understand. It shrugs its 8-bit shoulders. We are told that we must link the mystery of the Gamer’s Keyboard to the world of financial aid before we can understand its true power.

As our character begins its quest, an ominous voice bellows, “Find ‘The Gamer’. He is click-click-clacking in Lower Office Dungeon.” That’s good to know. As our character approaches Lower Office Dungeon, the clatter of mechanical keys becomes audible. We spy The Gamer in a dark corner and stop to chat. The Gamer tells us that he is unable to help us with our quest until his work is completed. We spy shackles on his wrists and ankles. He asks if we know a sorcery known as ‘macros’. We have heard of macros, but know not how they work. The Gamer describes a process in which Gamer’s Keyboard can be programmed to perform a vast amount of specific keystrokes with the push of a single button. This sorcery would greatly increase his productivity, allowing him to finish his task and pursue our quest. What!? Mind blown. The Gamer gives us ‘User Manual’.

<Save Game and Quit>

So, um, what is this Gamer’s Keyboard and what special powers are contained therein? In reality, keyboards and software have been developed specifically for gamers, allowing them to create and store macros. A macro is a series of actions, such as keystrokes, that are performed in sequence to help with repetitive tasks. This allows gamers to stock pile their combos, then unleash them with a single press of a key. That sounds like it might be useful for financial aid professionals, right? Let’s take a closer look.

There are many gamer keyboards, sometimes called macro keyboards, on the market today. Each comes packaged with proprietary software to record, edit and control macros. Users do not necessarily need to purchase a new keyboard in order to make use of macro functionality. Standalone software apps, such as Microsoft Mouse and Keyboard Center can imbue your existing hardware with macros. There are however, many benefits to purchasing the keyboard. These devices are known to provide a more sophisticated finger response and have additional keys. Most have a separate row of keys specifically designated for macros, keeping them out of way when you’re rapid firing email responses.

Let’s look at a basic example of how a macro can be useful. Think about something you have to type many times each day. As a Banner system user, I enter rraareq (a form name) seemingly hundreds of times a day. I could record a macro strictly for that, but I could go a little further. After inputting the form name, I also have to press enter to get into the form then control + page down to populate it with data. A macro makes it possible for me to press one key and get right to the information I need.

As long as you are able to complete a process with the exact same keystrokes each time, you can use this function to make life a little easier. Do you ever conduct reviews based on lists or spreadsheets? I have some macros built that copy a student ID number from a spread sheet, mover to a new application window, type a form name, paste the ID number, populate the form, return to the spreadsheet, then press the down arrow to get the cursor waiting at the next ID number. To repeat the entire process, I simply click the key again. While I can tell you exactly how many keystrokes are saved, I cannot attest to how much repetitive motion injury may be avoided. Are you beginning to get an understanding of how a gamer keyboard can reduce strain and increase productivity? Good. Let’s get back to the games.

If you have ever played a videogame, you know that there is danger around every corner. There are always pitfalls (no, not the kind licensed by Activision). Avoiding peril is the only way to master this sorcery of macros. Don’t fret, though. If your path is blocked, Google and YouTube contain divine tomes (forums and guides) to help you continue the mission.

Can financial aid professionals harness the power of The Gamer to 1up our processing game? Absolutely. Whether or not it is a useful addition to your workstation is up to you. Should you choose to pursue this option, gamer and macro keyboards are available through most office supply vendors. Alternatively, they be can purchased at computer centric retailers everywhere. The choice is yours. If you spend the vast majority of your day click-click-clacking away at a keyboard like I do, you owe it to yourself to invest in one you enjoy using. Especially if it makes things even the slightest bit easier.